How to Tell If You Have a Monotone Voice

I’ve had a few questions about monotone voices lately and people tend to be surprised by the answers, so I thought I’d write them up here – what causes a monotone voice, what are some examples of one, is it an attractive quality? The answers might surprise you…

What is a monotone voice?

A monotone voice is one which doesn’t vary much in pitch; the range of intonation is much flatter.
Andy Murray is an extreme example of this – he’s the most monotone man in our database. However, a lot of actors have this kind of voice too – Tom Hiddleston, Harrison Ford and Alan Rickman are all good examples.

A female example might be Emily Blunt (based on this interview), although it has to be said that women just vary their tone more than men do. In fact, of the 150 voices in Vocular’s database, the 50 most monotone all belong to men.

How can you tell if you have a monotone voice?

Well, sorry to get to the sales pitch so early on, but there’s only really one way of telling, objectively, if you have a monotone voice. Vocular scans your voice recording to tell you how varied or monotone your voice is, as well as other stuff like your voice depth and how much vocal fry you speak with. You can see an example of the analysis below. Anything under 10Hz we classify as monotone and anything above 20Hz is fairly varied. 30Hz tends to be so varied you only see it in a few speakers like David Attenborough. 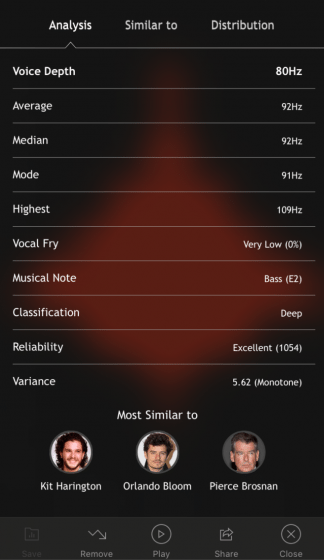 We also do slightly more sophisticated things, removing vocal fry and anomalous high-pitched frequencies which would otherwise skew your figure quite a lot.

What causes a monotone voice?

Testosterone definitely seems to be one cause. Men tend to have more monotone voices than women, and this change kicks in during puberty – as the voice drops in pitch, it becomes flatter and less intonated too. Similarly, a study which pitted men against each other found that those with higher testosterone levels had more monotone voices, and these same men also had stronger arms and sounded more dominant than the other men.

This is something we see in Vocular’s database too. Not only did the 50 most monotone voices all belong to men, the Top 3 all belonged from former #1 tennis players: namely Andy Murray, Novak Djokovic and Roger Federer. So it fits the brief of a competitive personality almost too well…

As for other causes, it’s hard to say for sure but a flatter tone has been correlated with a couple of surprising things. The first is that men with monotone voices seemed to be healthier than other men. A study on immunity found that these men gave themselves better general health ratings, had higher future health expectations, and greater levels of a salivary antibody, sIgA, which has been linked lower rates of cancer and respiratory disease.

Another surprising connection was that men with monotone voices tended to have more sexual partners, even though these voices were rated as no more attractive than the more varying voices. More on this in the next question…

I should say here, unfortunately all of these studies only focused on the male voice, so we can’t say if any of these findings hold up for women. This is basically because the male voice undergoes a more radical transformation during puberty and therefore seems to have been shaped by sexual selection more than the female voice, so it’s more of a mystery to evolutionary psychologists.

This one really depends who you are and where you are. If you’re a man in the English-speaking world, then being monotone doesn’t seem to make a difference to your vocal attractiveness. Studies don’t tend to find a correlation and you see this in the voices people claim to like – for every Alan Rickman or Tom Hiddleston there’s a Morgan Freeman or David Attenborough.

However, studies done in French, Chinese or Japanese all find a monotone voice to be unattractive in both sexes. This is probably a cultural thing stemming from the language – for example, Mandarin is a tonal language and relies on changes in pitch to give words their literal meaning, so a monotone voice sounds quite alien in China.

This also fits the general observation that familiar-sounding voices tend to sound more attractive. Even though everyone thinks they hate the sound of their own voice, they most likely don’t. If you take a recording of someone, mix it in with a bunch of voices all saying the same thing, then get that person to rate how attractive they find each voice, they generally give their own voice a high rating.

For women in the English-speaking world, annoyingly I could only find one study, but this found that, like with men, being monotone didn’t make a meaningful difference. You can see this in the table below (where F0-variance refers to how much intonation a voice has). In fact, none of the objective measures these researchers examined had a meaningful effect on how attractive women sounded. You can see this below, where asterisks indicate significant results.

Then why did a monotone voice predict sexual partners?

Well, there are basically two modes of sexual selection. Everybody knows the first, which is selection by the opposite sex (i.e. a particular trait evolves because the opposite sex finds it attractive). However, there is a kind of selection from the same sex too. Some traits emerge because they scare off love rivals. Beards are a classic example of this – they tend to make men look less attractive on average, however they also make men look more threatening, which makes it easier to stop other men from getting in your way. Basically, sexual selection is magnetic: it’s not just about attraction, it’s also about repulsion.

Some psychologists think that this same-sex phenomenon might be at play in men’s voices too. In other words, a typically masculine voice – deep, dark, monotone, loud, gruff – evolved more to intimidate than to attract, which gave these men more of a monopoly on mates. It sounds a bit alien, and there are certainly reasons to doubt this theory which I’ll go into in another post, but a lot of changes during puberty don’t make men any more attractive but do make them more threatening.

So why all the hate for monotone voices?

If a monotone voice really signifies health and doesn’t usually make voices less attractive, then why is it something people complain about, like nasality or vocal fry? Well, I think there’s a bit of a linguistic trick going on here. See, a monotone voice is not the same thing as a monotonous voice, there’s actually almost no correlation between these two things. You can see this in table below, where the r-value is -.02. That’s about as uncorrelated as it gets. 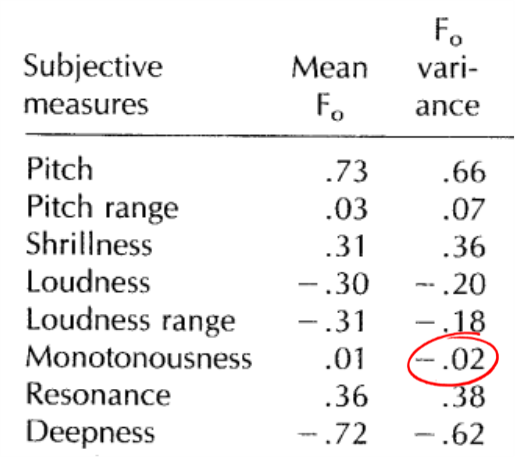 This same paper found that monotonousness made all voices significantly less attractive, although the authors never explained what made a voice sound ‘monotonous’. My gut feeling is that it’s something to do with the rate of speech and the number of pauses – it’s hard to imagine someone fast-talking and monotonous, and people generally find a faster-than-average rate of speech more attractive. That’s just a hunch though.

Bottom line is that a monotone voice seems to be an asset if you’re a Western man, but probably not if you’re a woman (although the lack of studies doesn’t give us much to go on). And if you’re moving to France, China or Japan, you might want to shake it up a bit.